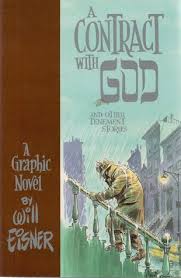 A Contract with God by Will Eisner tells the four stories revolving around the characters living within a Jewish tenement in the Bronx at 55 Dropsie Avenue in the 1930’s who must cope with personal frustrations in their day to day lives in realizing their personal desires for a more satisfying life. In the first story plot we are introduced to Rabbi Frimme Hersh who has dedicated his life to serving the community from his boyhood in tsarist Russia to such a great extent that the leaders of his community pool their money in order to send him to America. Believing he is special to God he makes a contract with God to continue his good works in order to be favored by God. Once in America, he continues his good deeds even taking in an orphan infant and raising the child as his own. When his daughter Rachele is taken ill and dies, Rabbi Hersh is grief stricken unable to rationalize the loss for himself since he has lived in accordance to God’s laws and yet has lost his beloved daughter despite having a personal contract with God in which the rabbi has always upheld his part of the contract. Why then has God chosen to rescind on his part of the contract?

The second story The Street Singer tells the story of Diva Marta Maria who dreams of returning to the prominence despite knowing that her time has passed she hopes to use a down and out street singer to that end, while he has the same manipulative plans for her.  The third story The Super, Mr. Scuggs the anti-Semitic superintendent at 55 Dropsie Avenue tenement is in no hurry to make the needed repairs for the building residents. Mrs. Farfell’s young niece Rosie falsely accuses Mr. Scuggs of molestation. The final story in the novel the Cookalein tells the story of various characters in the neighborhood that all go to vacation in the country in the Catskill Mountains. Benny a clothing cutter and Goldie a secretary both hope to meet a rich lover who will end their days of toil. Sam a neglected husband is trapped in a loveless marriage with a wife who resents his inability to provide adequately for the family. Despite knowing of his affair she refuses to give Sam a divorce forcing both to live a life of quiet desperation.

The stories that are depicted are definitely geared toward older readers, with themes of death, suicide, and rape presented with explicit sexual content. I enjoyed reading this book and analyzing the stories themes and characters as the deal with life’s struggles in dealing with loss, unrealized dreams, and personal discontent of not knowing how to improve their lives. 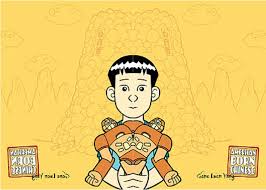 American Born Chinese by Gene Luen Yang was truly a joy to read. As a Chinese American I am surprised that I did not know about this book.  The novel describes the efforts of Jin Wang a chinese American third grader as he struggles to assimilate into American culture while continuing to respect his own cultural heritage. The book describes Jin Wang challenges to be socially accepted within his school through the telling of three stories, the Monkey King who was rejected from socializing with the Gods due to being a lowly monkey. Reacting in anger the Monkey King transforms himself as a master in Kung-fu to take revenge on the Gods only to be punished by the Gods to live under the rocks of a mountain for 500 years. In the second story we are introduced to the main character Jin Wang a third grader who struggles to be socially accepted by his “American” peers. Jin Wang struggle to assimilate continues through high school when Jin has a crush on an American girl Amelia whose friends do not feel that Jin does not deserve her. Tired of being rejected Jin transforms himself as Danny a white “average” American boy with blue eyes and blode hair but must still continue to cope with his cousin Chin-Kee an annual visits from China who is an extreme character that embodies every possible negative Asian stereo type. Chin-Kee always manages to embarrass Jin or Danny beyond repair requiring Jin to always start new in a new school after his visits. How is the Monkey King, an alter ego named Danny, and Chin-kee related to Jin?

I enjoyed reading this book very much as a Chinese American I could relate with Jin Wang’s feelings of insecurity and isolation through school when your ethnic identity and culture is so much a part of your family life. Jin’s transformation into Danny was prabably every Chinese child’s wish at one point through their school experience.  The way the author ties all three different stories together is clever and entertaining throughout the story.