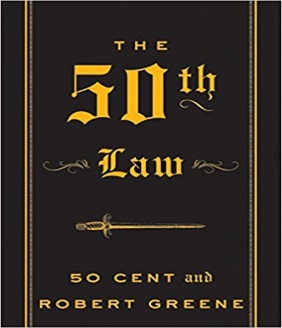 The 50th Law is the autobiography of Curtis Jackson or better known as the rapper hip-hop artist and entrepreneur 50 cent. Written in collaboration with author Robert Greene whose first book The 48 Laws of Power became a critical and commercial success in 1998 within the personal development genre. This same success followed Robert Greene’s collaboration with rapper 50 cent in 2009. Using the same format in The 48th Laws of Power, the behaviors and strategies of history’s most successful leaders are analyzed to identify and explain a common mastery of thought and action that results in desired outcomes. In The 50th Law, 50cent’s journey from obscure poverty within the ghettos of Southside Queens New York to the prosperous entertainer and entrepreneur he continues to be today is analyzed and compared to other successful leaders of the past who also overcame great hardships using mental strength, strategy, and persistence in a similar way to accomplish their personal visions of success for themselves.

This book is great to listen to since the authors themselves read the text alternating from Robert Green and the entertainer 50cent explaining how a person can recreate their existing circumstances as 50 cent did from a street hustler to one of the most famous hip-hop artist and entrepreneur of his time. As an educator, I would recommend this book to become required reading for middle years and high school students because it explains the life an individual that is relevant to teens while incorporating the unique experiences of historical figures who overcame significant obstacles to achieve their personal success.

The winner of the 1963 Newbery Medal 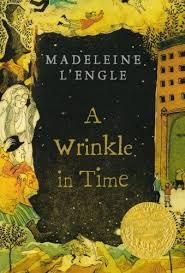 A Wrinkle in Time, by Madeline L’Engle was originally published in 1962 tells the story Meg Murry who with her brother Charles Wallace and Calvin O’ Keefe must travel to the planet of Camazotz where her father Mr. Murry, a famous physicist is imprisoned by the IT who is controlled by the Black Thing the source of all evil in the universe.  Charles Wallace Meg’s youngest brother is extraordinarily smart and is able to empathically read certain people’s thoughts and feelings introducing the celestial beings Mrs. Whatsit, Mrs. Who, and Mrs. Which to Meg and Calvin who sacrificed their celestial status to live on Earth as elderly women to destroy the Black Thing. The three women guide the three children on their journey to Camazotz so that Meg can rescue her father from IT. The celestial beings cannot remain on Camazotz due to its low energy and provide Meg with gifts to assist them on their journey and advising them never to separate before departing. The power of The Black Think increases with man’s negative thoughts and beliefs only its opposite love can defeat the power of The Black Thing that is engulfing the planets of the universe. On Camazotz Charles Wallace becomes under the influence of IT. Can Meg now rescue both the brother and father from the influence of the IT?

I am not a fan of science fiction but enjoyed reading a Wrinkle in Time mainly due to the themes that were presented in the story.  Earth, a partially dark planet is losing the battle between good and evil as the influence of The Black Thing increases throughout the planet, demonstrated through the increased need for people on earth to conform to social standards manifested with the creation of suburban towns within its society rewarding commonly accepted beliefs and ostracizing those practicing individual thought. However, despite earth’s current condition humanity has the power to defeat the evil of The Black Thing with love and acceptance of each other.