Two-Way Street is a teen romance novel that teens will enjoy reading. The story begins with the main characters; Courtney and Jordan breaking up because Jordan is interested in a new girl he has met online on the Myspace social networking site.  Before you think this is just another teen romance where opposites attract and then must deal with the consequences of a break up because they were just too different, to begin with, the novel present’s common miscommunication practices that are relevant to teenagers and adults alike in a personal relationship. Despite breaking up, Courtney and Jordan continue with their plans to drive to college together on a road trip from Florida to Massachusetts where they planned to attend together. On the road trip, the romance of Courtney and Jordan is internally reviewed by each character, where you learn more about the couple from one another’s perspective of the other. The reader discovers that despite having feelings for one another each are keeping secrets from one another which are the true reason for the couple’s breakup, rather than the superficial reasons that are presented to the outside world.

Having Jordan develop and explain Courtney as a character is what female readers will enjoy. What is unique about this romance novel is that the reader gets a deeper analysis of the relationship between Courtney and Jordan from the male’s perspective that offers female readers an insight to how a boy interacts and perceives a girl that he cares for. From Courtney's perspective, the reader is introduced to the couple’s social circle and public personalities. Ultimately, the reason Jordan’s break up with Courtney has little to do with one another and more to do about the adults in their lives. Will Courtney and Jordan have the courage, to be honest with one another, and allow a good thing to evolve into something better? Or is this the end of a relationship that brought out confidence in a shy girl and grounded a popular boy? 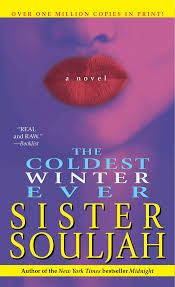 The Coldest Winter Ever, by Sister Souljah tells the story of Winter Santiaga the eldest daughter of Ricky Santiaga the neighborhood drug lord. Thirteen-year-old Winter lives a pampered life within her Brooklyn ghetto with her three sisters; Porsche, Lexus, and Mercedes and her mother “moms” who is more of a sister than an authority figure or role model. Winter lives a life of extreme indulgence provided by their father’s wealth. Winter learns to live according to the value system practiced on the street where men are valued for their ability to support women financially and women in return are valued for their superficial beauty and sexual reciprocation. When her father is arrested for his criminal activity, the girls are taken into foster care as their mother has no employable skills and is a drug addict herself.  As the eldest Winter’s lack of character is revealed as she avoids foster care abandoning her younger sisters to rebuild her earlier lavish lifestyle by living with various men and ultimately practicing the same life of crime as her parents. The author herself becomes a character in the story as a community activist encouraging young people of the neighborhood to become self-reliant through education to change the cycle of poverty that has engulfed its inhabitants. Winter’s journey offers her many opportunities for personal transformation. Will she continue to pursue the temporary satisfaction of material wealth through manipulation and street hustle of her peers or will she choose to become an agent of change for her own life and those close to her?

I enjoyed reading this book and learning about life in the ghetto from the perspective of a character that has grown up within a criminal lifestyle and regards it as a way to make a living the same as a teacher, accountant, or office worker is doing. What was interesting as I read the novel is the main character is certainly a spoiled child at the start of her story and her drug lord father is a loving father who clearly wants better for himself and his family. Becoming successful enough to move his family out of the Brooklyn ghetto and into a Long Island mansion. However, even the physical move out of the ghetto does not take the psychological lessons that Winter has learned from growing up watching her parents. Winter operates consistently in survival mode certainly after the arrest of her father but it becomes clear that no matter how superficially successful one’s life may seem everyone in the ghetto are operating in survival mode. It’s only a matter of time before the drug lord is stopped by authorities or by competing dealers. This present’s the author’s message of self-reliance within the community as too idealistic. If one is constantly in survival mode is the movement toward higher consciousness even possible? In order to take on personal responsibility and change your life. One in survival mode is content with the present joys available perhaps because they are all too aware that it is temporary and that it is only a matter of time before it can all come crashing down. This left me questioning whether there is a better way to approach the social problems that plaque impoverished neighborhoods? It seems that a psychological personal transformation must take place before any change in the outside world can be manifested.