Until the introduction of radicals, dictionaries relied on semantics to organize characters.

The oldest surviving Chinese Dictionary, known as the Erya, is comprised of 19 chapters - Wikipedia (2020f). Each chapter organized Chinese characters that were seen in literature at the time into various categories. It was possibly assembled in the Qin Dynasy (221–207 BCE) or early Han Dynasty (206 BCE–220 CE).

Below is an image of the Ezra on display: 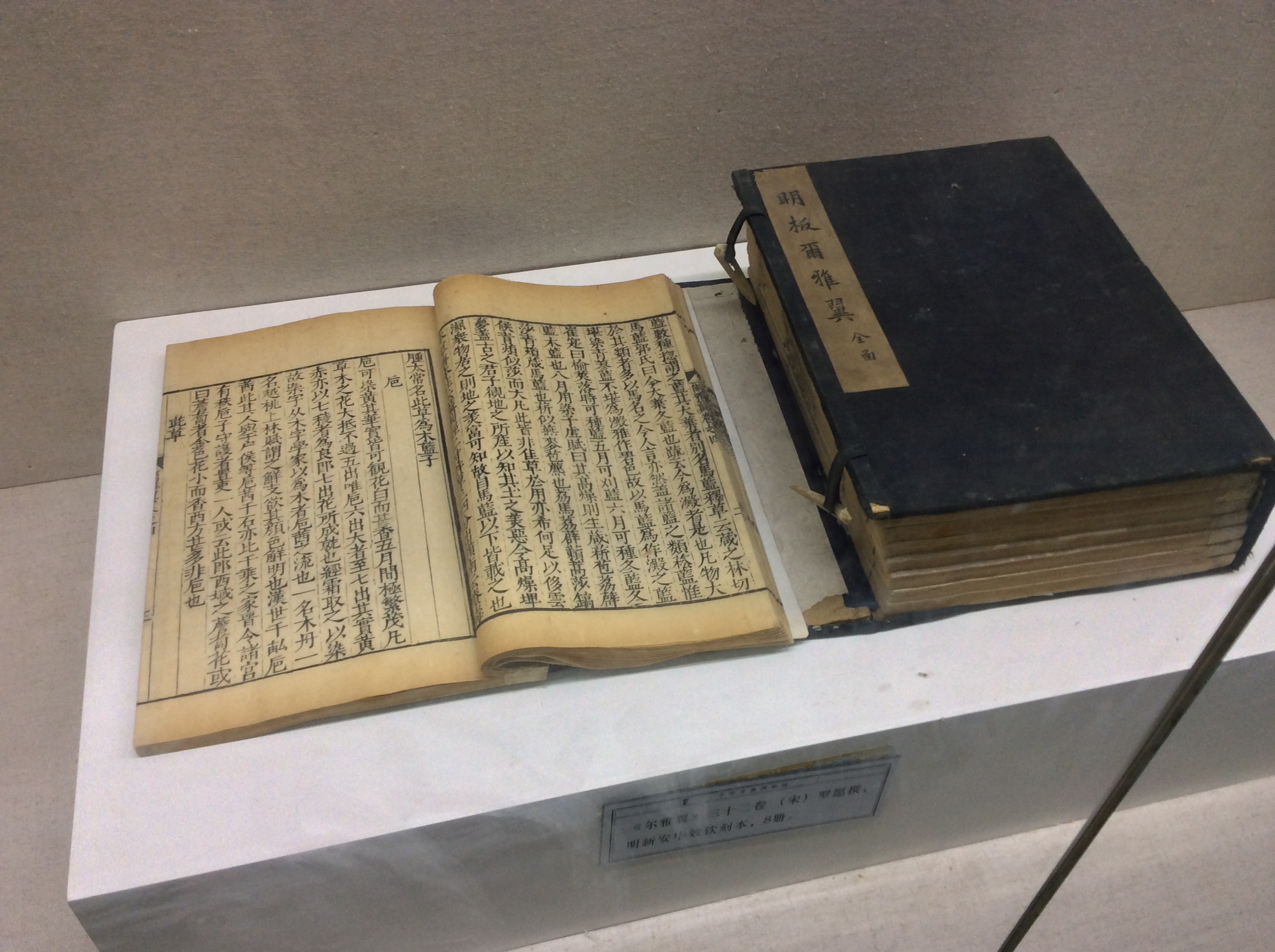 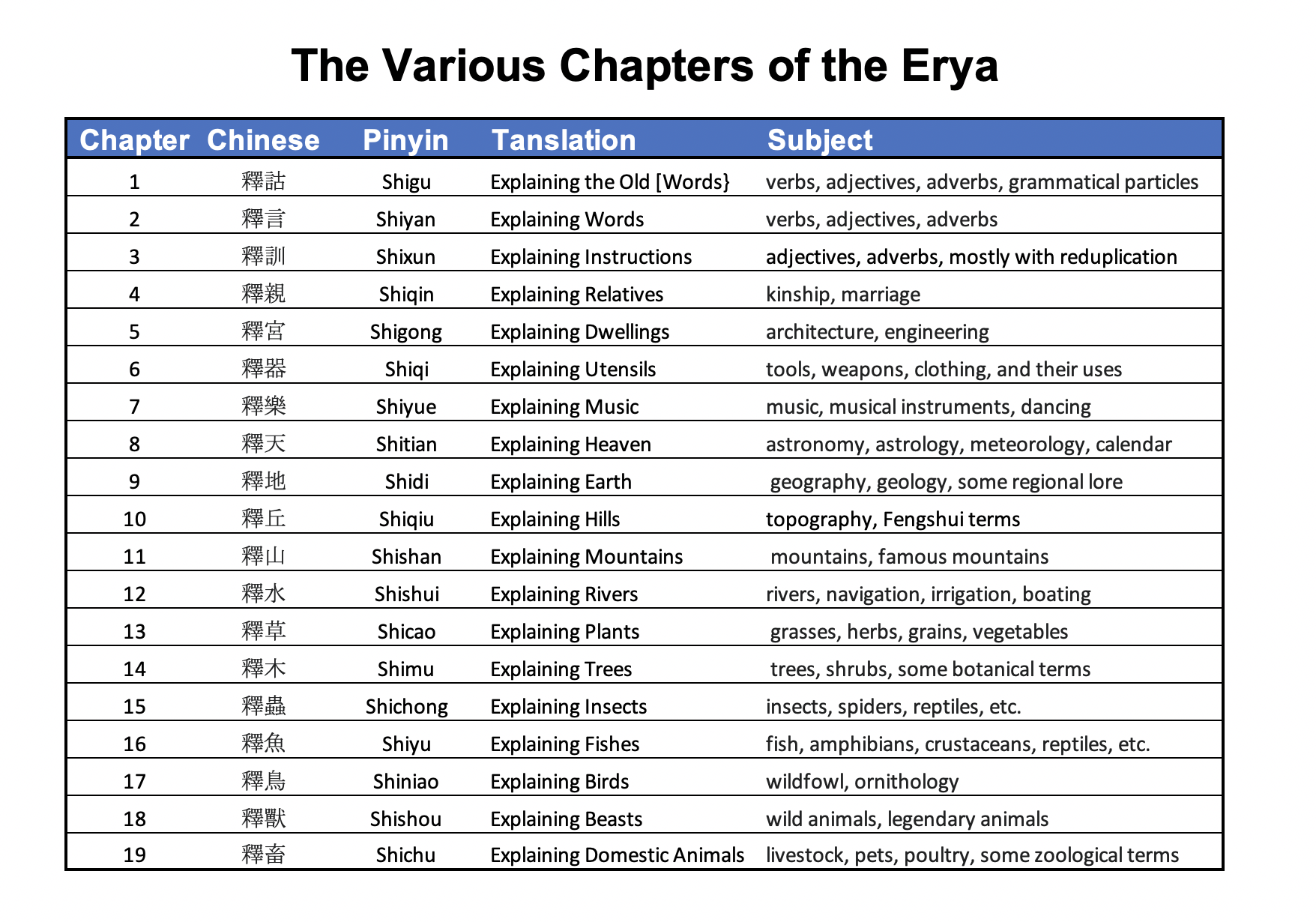 Another notable example of a semantic dictionary is the Fangyan (方言), or “Regional Speech” dictionary - Theobald, U. (2010e). It is the oldest surviving dictionary in the world that focuses on dialects. It was written during the Han Dynasty (206 BCE-220 CE) in order to help imperial representatives have better access to local languages.

Examples of chapters in the Fangyan:

Below is an image of the Fangyan: 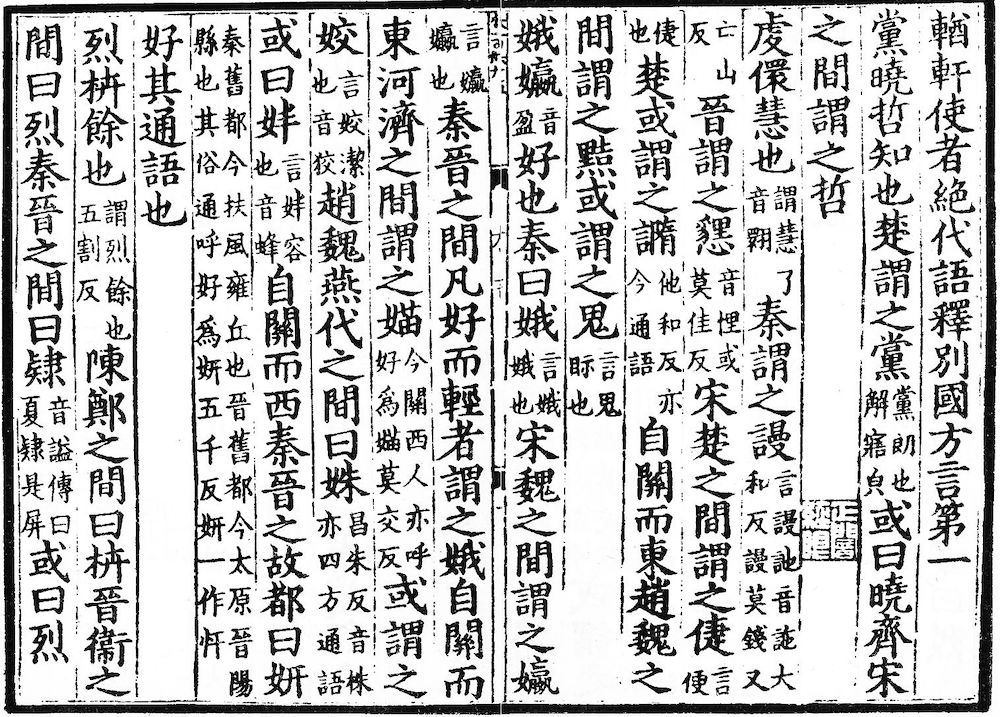 In the Late Han Period (25-220 CE), a system based on the reoccurrence on certain graphic components – or radicals –emerged with the 'Shuowen Jiezi' (說文解字), or "Explaining Simple and Analyzing Compound Characters” - Theobald, U. (2018a).This dictionary, which was completed in 100 CE,  organized Chinese characters into a system of 540 bushou (部首), which roughly translates to a "section header".

The characters listed under each "section header", or radical, were arranged in a very complicated manner that was not eas to understand. Words with positive connotations were listed first, and lead into words with more negative connotations, technical terms important for state rituals were also listed before common words, and words with similar meaning were places into similar groups.

During the Liang Dynasty (502-557), the 'Yupian' (玉篇), or "Jade Chapters", was the third book written to use radicals to organize Chinese characters - Theobald, U. (2010d). In this version, some radicals were removed and others were added. In the end, the book contained 542 radicals.

Below is an image of the index of radicals found in the 'Yupian':

These fundamental changes served as a model for today's modern dictionaries,

The radical method is usually effective, though sometimes a radical may not be obvious. However, this method continues to be widely used in the present day.

The first surviving rhyme dictionary is the 'Qieyun' (切韻), or "Cutting [Spelling] Rimes" - Theobald, U. (2010b). The work was written during the Sui Dynasty (581-618). however the competed text is lost though TAKATA Tokio explains that various fragments have been found in his paper, 'The Chinese Language in Turfan with a special focus on the Qieyun fragments', Tokio, T. (2019). It is organized into 193 rhyme groups and further organized words by tones, or inflection, needed to pronounce each word.

The oldest surviving copy of a completed rhyme dictionary is called the Guangyun (廣韻), or "Extended rhymes" - Theobald, Ulrich (2010a). It was the first government-issued rhyme dictionary in China, and became an important tool for studying of ancient Chinese language, specifically late middle Chinese.

Below is an image of the 'Guangyun':

While incredibly useful for understanding pronunciation, the predominant problem with older, phonetically arranged dictionaries is that users must already know how to say each character and how they rhyme with others in order to efficiently use the resource.

The first known work of a bidirectional Chinese and English dictionary, which began to continuously publish volumes in 1815, was written by a Scottish Missionary named Robert Morrison, Wikipedia (2020e). 'A Dictionary of Chinese Language', Wikipedia (2020d), was organized by 214 radicals, alphabetically from Chinese to English, and alphabetically from English to Chinese.

Below is an image from the 'Dictionary of Chinese Language', Keahapana (2016): 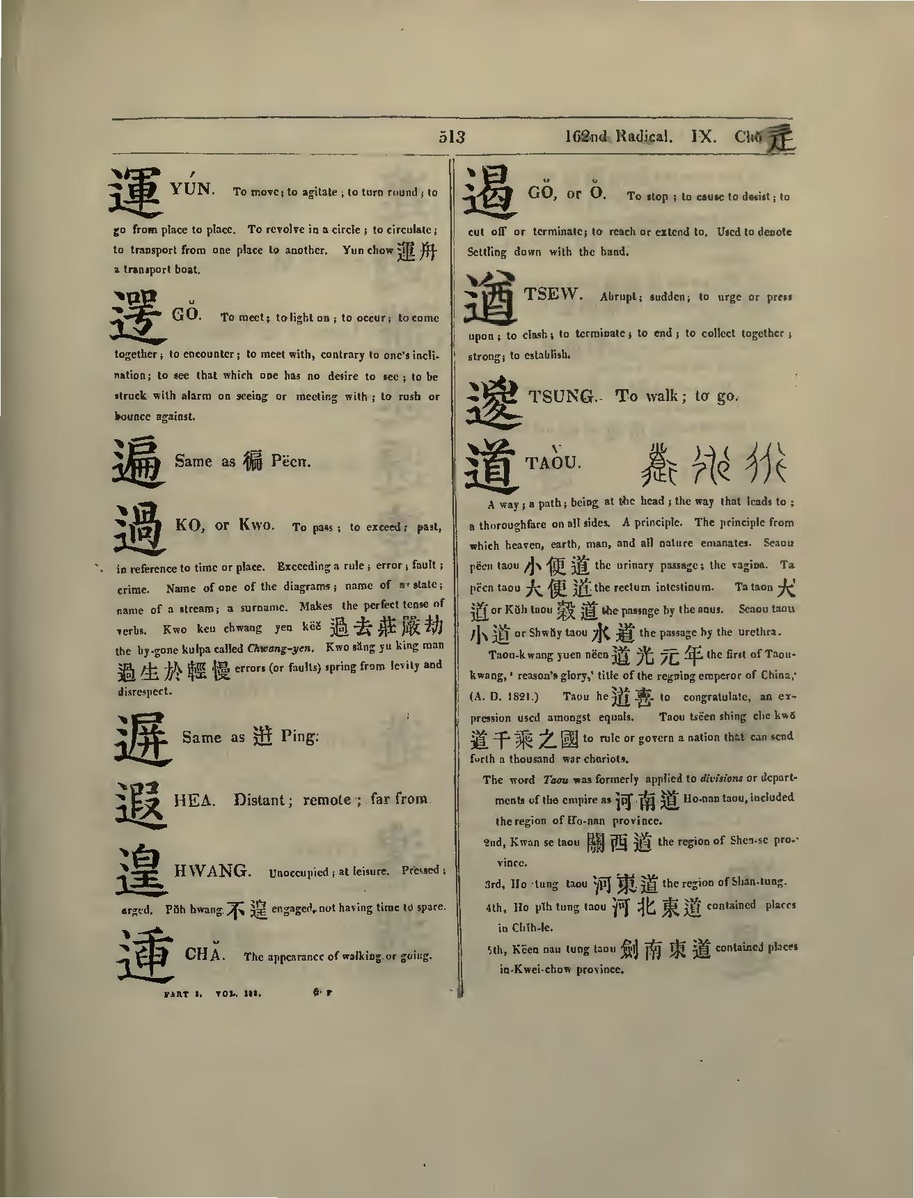 However, it would be the Wade-Giles System that would eventually become the standard for cataloging Chinese writing in the West.

Expanding Access to English Speakers with the Wade-Giles System

In the mid-19th century Thomas Francis Wade, Wikipedia (2020c), had worked to create an alphabetic romanization of the pronunciation of Mandarin Chinese. The system was later modifed by Herbert A. Giles, Wikipedia (2020b), and lead to the creation of the Wade-Giles System.

Below is an chart that demonstrated how various words would be transcribed in the Wade-Giles System:

Wade was a Chinese scholar, a British ambassador in China, and was the first professor of Chinese at Cambridge University. He had published the first textbook on the Beijing dialect of Mandarin in English, Yü-yen Tzŭ-erh Chi (語言自邇集), which included an earlier version of what would eventually become the Wade–Giles System.

The system, was further refined in 1892 by Herbert Allen Giles (in A Chinese-English Dictionary), who was a British diplomat in China, and it eventually became one of the predominant manners utilized for cataloging Chinese collections and content in Western institutions.